Do you have a “Fussy Eater” in your house?
I think all kids go through phases and by us parents obsessing about it we make it worse. Parenting magazines and websites are full of tips on “how to get your fussy eater to eat their veg” (In fact I recently contributed my coping with fussy eaters tips to RSVP Magazine- check it out!)

I am sick to the teeth of articles with headlines like this, telling you that making a bento box with interestingly shaped green things make your vegetable-hating toddler devour them.

LIES. A cucumber shaped like a mouse is still a cucumber. Any toddler worth his or her salt can tell.

This will not turn your child into a vegetable eater. It’s definitely more fun, but broccoli won’t be any more welcome outdoors. In fact, it’s the perfect time to eat a plain ham sandwich!

Helpful tip #2. Eat together as a family and make mealtimes relaxed, happy occasions

*Chokes* Anyone who has eaten dinner with small children will find this advice hilarious. Dinner time is about spilling milk, complaining about what’s on the plate and stealing each other’s food. Also, hiding under the table and declaring that you need to do a wee or poo are excellent diversionary tactics, or better still doing a wee or poo while eating dinner.

It’s a matter of public record that my children help to cook almost every meal. My five-year-old will enthusiastically chop the veg, sort it, put it in the saucepan and beg to stir it, but when it comes to tasting he refuses point blank. This method DOES NOT WORK. Anyone who tells you that it does is LYING.

“If you make that sandwich look like a submarine then they’ll eat it”, “Cut the carrots into flower shapes, they’ll love them”.

I thought this might work on some foods, (not vegetables) so I made frittatta shaped like a dinosaur. He helped whisk it, he chose which shape it would be but he point blank refused to even lick it. 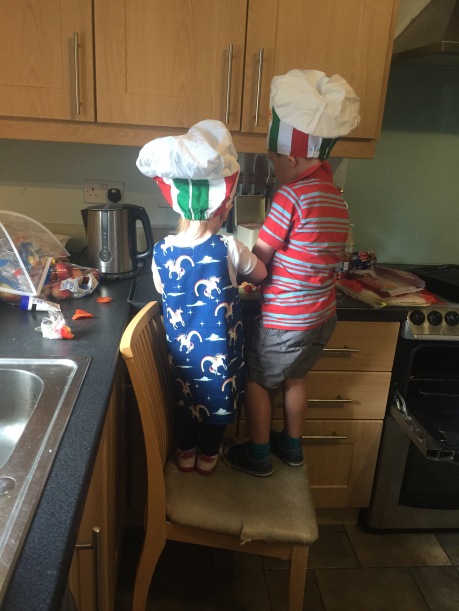 Here’s the thing though. Two of my brothers rarely ate veg as children but both eat them now, they’re also strapping six footers so I’m not concerned. (Coincidentally my third brother’s usual order in a restaurant as a child was “a plate of cucumber” and once went a few weeks eating dinner in the form of whatever was for dinner put inside a wrap with salsa and cucumber)

So instead of stressing about my fussy eater I’ve adopted these coping strategies:

1. I make sure that they get as much fruit into them as possible. Cos, y’know, vitamins.

2. If you’ve a vege-phobe on your hands, get the taste and goodness into them with soup or blended sauces. I’ve a child who hates tomatoes but would eat buckets of homemade tomato soup when it’s blended so I make a huge pot of it every week. (recipe here) She knows it’s tomato soup, she’s OK with that. 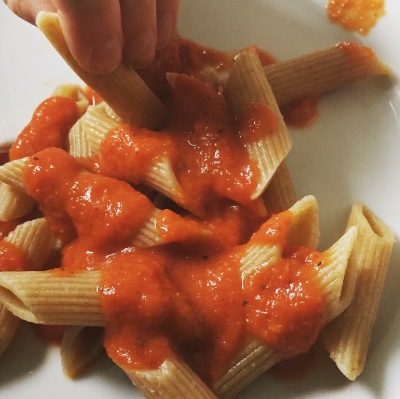 4. Put a little veg on their plate -this can be a risky strategy and may result in a row but sometimes it works. Other times it ends up on the floor, or thrown at me.

5. Put the vegetables in bowls on the table so he can see everyone else serving themselves, he recently tried mangetout when he saw it in front of him, I struggled to hide  my shock.

6. Watch her overall diet. We often talk at dinner time about what fruit and vegetables we’ve eaten during the day to make sure we’re eating enough. 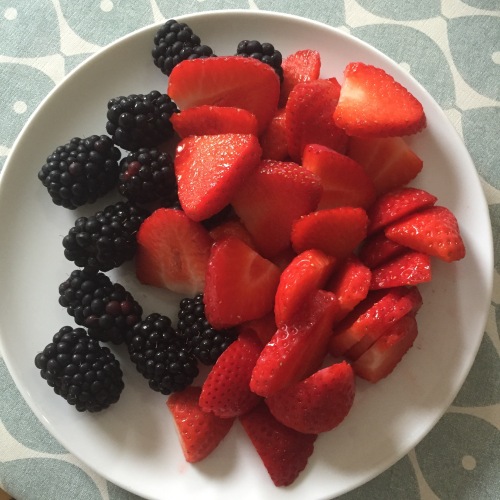 7. One refusal doesn’t disqualify- try foods three or four times before putting them off the dinner set list.

8. Often I’ll leave his dinner on the plate and after the initial row he’ll come back to the table it when he realises that he’s hungry. This only works if it’s something he genuinely likes.

9. Look at what they eat over the course of a day and get the right stuff into them by any means that works. If they’re snackers then make sure the snacks are balanced, filling up on hummus and veggie sticks is fine (AS IF!), but if the snacks are chocolate digestives that’s not so good.

10. If your child is healthy then they are probably eating enough, so don’t force-feed your fussy eaters. Standing over them to make them finish their dinner will only add to dinnertime stress for everyone.

11. I encourage my kids to try one taste of something new but I think it’s important they’re “allowed” not to like some foods. I would gag if someone force-fed me blue cheese or roast lamb, it might just be that raw tomatoes or broccoli are that food for your child, so let him be.

12. Try not to blame yourself, my kids were weaned on the same healthy food, and while one would eat salad all day his brother will not let an undisguised vegetable pass his lips, and their sister is in the middle, she’ll eat some veg, sometimes,  but will studiously pick others out of dinner, throwing it on the floor. 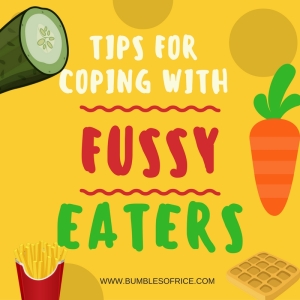 Leave a Reply to Bumbles of Rice Cancel reply