Home Work Whose Job Is The Most Important?

Whose Job Is The Most Important?

It was 7.45pm. We were driving back from a hurling match 25 minutes’ drive from our house. I’d left the house just after 7 that morning, had worked 8-4 then left work, called to the house to collect my five-year-old’s football gear and the sandwiches (that my husband had made the night before) and drink bottles (that I’d forgotten to put in to the lunch bags for the kids) and collected them from the childminder’s then drove the four of us to the match.

I stood on the sideline freezing, despite it being August, while my excited boy jumped around, his first match, his first time wearing the club jersey. I cheered as he scored goals, and encouraged him to “block hard” and “chase after it” feeding his sister rice cakes and chatting to other parents at the same time.

On the drive back to our town we chatted. We talked about matches, and songs and why we everyone who has swings in their garden is very lucky. Then there was a few seconds silence and my older son asked “Mam, whose job is most important, yours or Dad’s?” As I prepped my politically correct answer he added “Actually I think it’s Dad’s isn’t it?”. 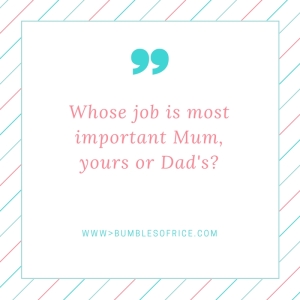 Time froze. I felt a million emotions. A pang. A stab. Here I was a working mother, taking one day off a week to give me work-life balance and my kids some time and it was being used to measure the importance of my work. It felt like it was held against me, not by my employer, not by my colleagues but by my son. He didn’t know of course that that’s how I felt, it was an innocent question and a logical (to him) conclusion.

I tried not to get defensive and asked him why he thought that. “Well Dad has to go to work more than you do, you get more days off”. *STAB*

He thinks that my job is less important because I take time off to do my really properly important job. I want to cry. I wondered why I did it.

Was I devaluing my job to society because I took a day off every week to spend with my kids? If so, what was the point of it all?

How could I give a good example to my children, to encourage them to have careers if the memo about flexible working hadn’t reached them? If they thought that really, Mam’s job wasn’t that important, or was certainly less important than Dad’s.

He needed an answer. I gathered my thoughts and told him that I have a job that only needs me for the amount of time that I do it, but that Daddy’s job takes longer sometimes to do, I said that both jobs are  very important and that his dad and I both spent a lot of time studying and working hard to get our jobs.

I don’t know if he bought it but the conversation moved on, in the car anyway. My internal conversation kept going for hours. It’s down to me. I need validation. It’s not that I need people to think I’m important, but I guess I want to feel valued.

What does important even mean? What’s an important job? Why did I care that he thought that his dad’s job was more important than mine?

Of course now I realise that what I should have said. Why does that always happen?

I should have said that the most important job is the one with the least pay, but the most reward. The one that keeps me up all night and on the go all day, 24/7, but the one that I’ll happily talk about all day long. The one where there’s no salary, no reviews, but oh so many benefits. The one that is on my mind all  the time, the one that makes a difference. He’d probably have smiled a bit as he realised what it was, then told me that that wasn’t really a job, just my life, and could he have something to eat please. That’s what’s the most important.