Castlecomer Discovery Park was on our list of places to go last summer, but between weddings and holidays we didn’t make it.

We arrived and went in to the Information Centre to check things out. The reception area itself is spacious and modern and has a very nice coffee shop too. We didn’t eat there, we brought a picnic and ate at the picnic tables in the courtyard, in view of some of the lovely shops.

We decided to book the the kids on the Junior Woodland Adventure Course (see below) and chose a walking trail which included the Elf and Fairy Village. We were sort of relieved that the boating was closed as it meant fewer arguments with the kids.

The Woodland Trails (we chose the shortest one) are peppered with signs explaining the wildlife and interesting features like this “lion” that my crew all had to climb. The trails are buggy friendly too, and there were some young children on scooters, which caused my lot to protest, but I wouldn’t have thought that the surface was the best for scooting, but it didn’t hold them back! 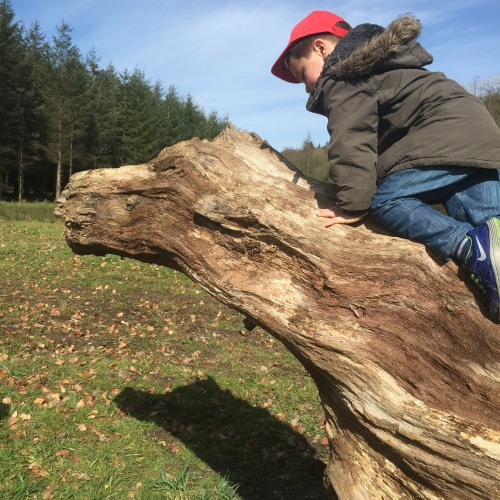 Our first stop was at the Junior Woodland Adventure Course, effectively an obstacle course of wood and ropes where kids need to be able to balance and steer themselves through the course. It’s not high off the ground, only  2 feet from the bark mulch covered ground and is open to 3-8 year-olds, my seven-year-old thought it was too easy for his age, my almost-three-year-old refused to go on it, and my five-year-old loved it, it was the right level of challenge for him without being too hard or too easy. Helmets must be worn and are provided, and it costs €5 per child  for two turns on the course, which in my opinion is expensive, since we’ve certainly been in similar (albeit without helmets) for no charge. We paid in the visitor centre but it’s also possible to pay when you get to the centre, which is about a ten minute walk from the visitor centre.  It’s open weekends only 12.00 – 4.00pm (weather permitting) according to their website. 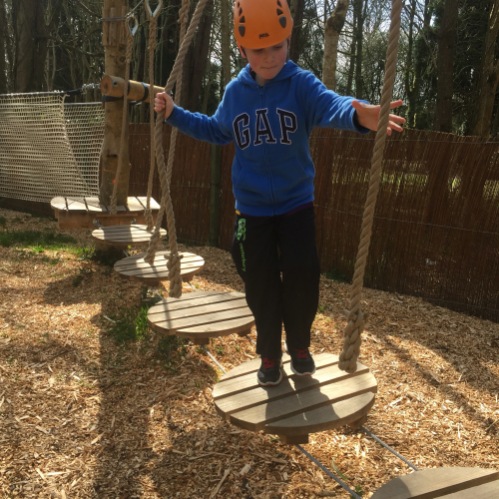 The Elf and Fairy Village is very cute, although Laoise was disappointed as she thought the stuff was more elfy that fairyish, and two-year-olds have strong opinions on matters fairy-related. That said, she and her smaller brother craned their necks into every window to try to spot any kind of magical folk. When they didn’t find any they took to turning over the wooden toadstools which were much (much) more difficult for a parent to get back into position. The village was very sweet, with a several different buildings, including one that was very hobbit-like that you could run on the roof. 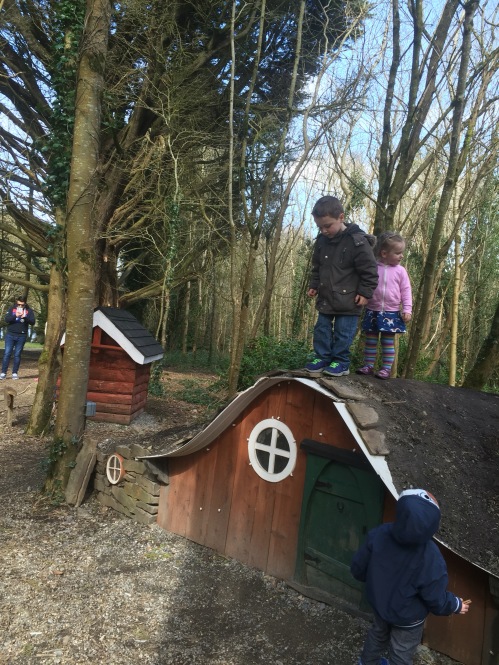 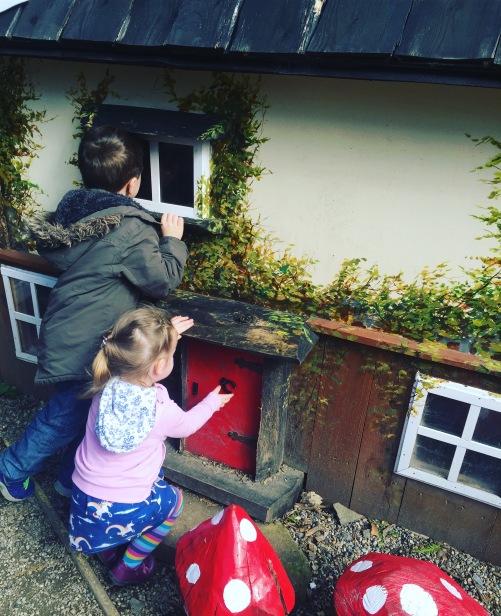 There’s 80 acres of  woodland in the park, opened since 2007.  We walked on as far as the river. At the river we noticed building work and found out afterwards that it was for the longest twin ziplines in the Republic of Ireland which are due to open in time for the 2016 summer season there. I won’t be first in the queue, but it really looked amazing to swoop over water from that height.

We then walked back around the small lake, ducking down before the bridge to discover a “scary cave”.

We also spotted this gem in the trees on the way back around, poor Laoise said that she wished she had wings so she could fly up and look in the windows, but she had to make do with sitting on her daddy’s shoulders, still miles too far away.

We finished our visit with a trip to the playground at the entrance, beside the bigger kid adventure part. It’s based on a mining theme so there’s lots of climbing and playing in sand to do, as well as a zipwire, swings, some very wobbly mining carts that my crew loved and a merry-go-round. A good indicator of the appeal of a playground to children is how long it takes you to get them to leave from the time you first announce that you’re leaving. This one took two parents fifteen minutes, so it’s up there with the best of them.

There’s no charge for entry to the park, you just pay for parking 1st hour parking is FREE; €3 for up to 3 hours; €4 for all day parking; €45 for an Annual Pass. We’ll definitely go back and would love to check out the Coal Mining Exhibition next time.

Disclosure: I wasn’t asked to write this review and we paid for entry an activities ourselves. All views expressed in this post are my own honest opinion. 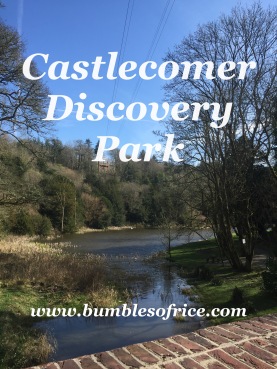