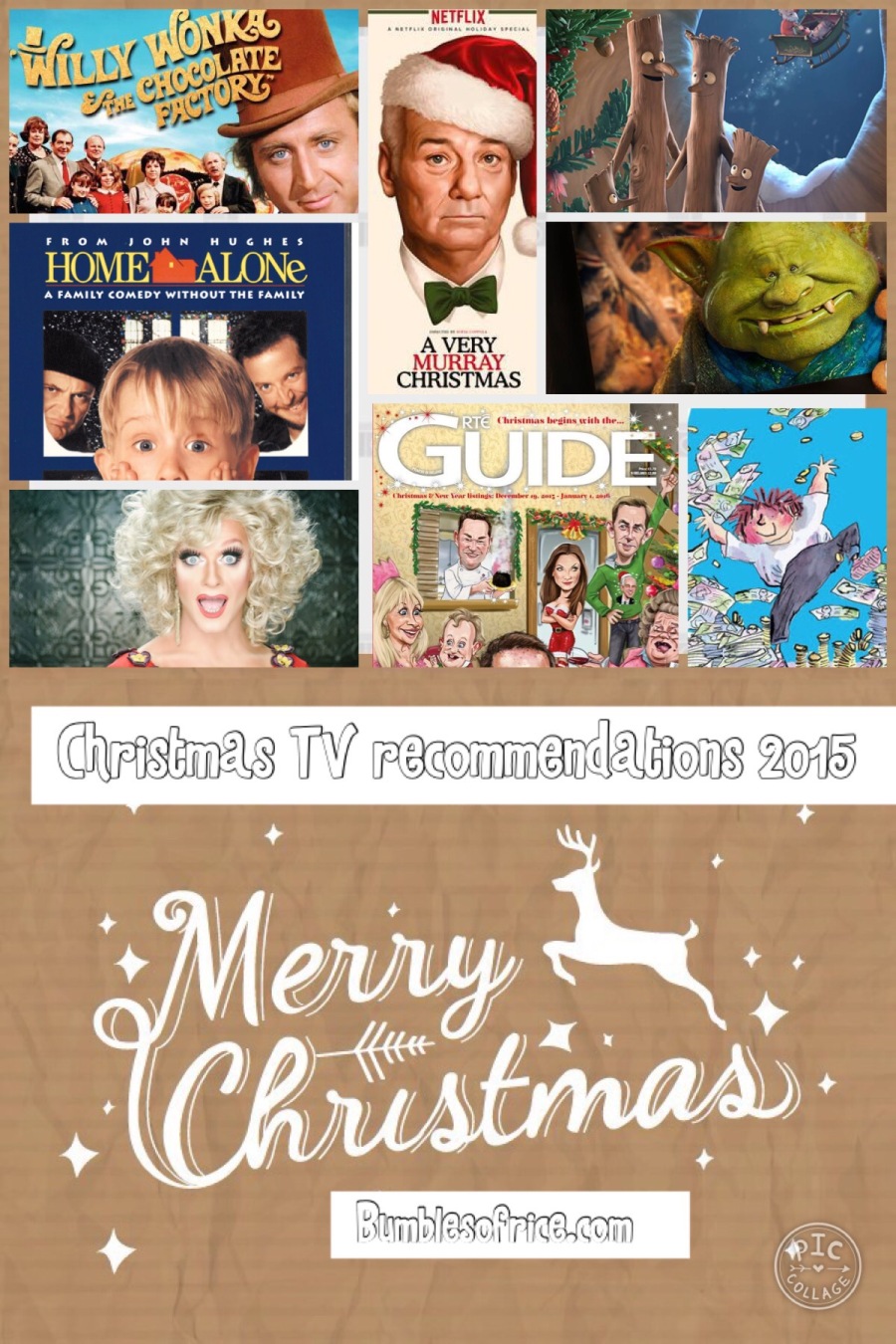 If you’re Irish one of the defining Christmas moments is buying the Christmas Bumper Edition of the RTE Guide and checking out what’s on TV over the holidays. This year I did it earlier than usual as I was asked to share my recommendations on the Marian Finucane Show on RTE Radio 1.

I was on the show on Saturday, if you want to hear Dave Fanning and I tell Marian all our festive picks you can listen to the podcast of the slot on the link below:

Link to Marian Finucane Show radio slot Christmas TV recommendations 2015
We didn’t have nearly enough to get all the great things that are on TV over Christmas in, but I’d prepared a long piece with descriptions so I thought I’d share it here, in case there’s anything you’ve missed. For the most part I’ve tried to avoid the very obvious, or the very cheesy, but that’s not always the case. I also haven’t mentioned any sport, because if you want to watch sport you’ll find it.

The last few Christmases we’ve had a new animated Julia Donaldson classic on TV, and this year it’s the turn of Stick Man, which since (spoiler alert) the story features Santa Claus himself it’s only surprising it took this long to release. Kids who like the story will enjoy the familiar illustrations, and it’s voiced by Martin Freeman as Stick Man (he narrated The Gruffalo), Hugh Bonneville as Santa with Jennifer Saunders narrating. These are great for calming overstimulated little ones down with the repetitive prose, and be assured, there’s a happy ending, even though things aren’t looking great for the Daddy Stick throughout the story. Christmas Day BBC 1 4:45pm; repeated on New Year’s Eve at 4:15pm

David Walliams of Little Britain fame, is also a very successful children’s writer, with 8 books now published. His third book Billionaire Boy hits our screens this Christmas, with Walliams playing a dinner lady at the boy’s school himself. Kids love these books, they’re in the style of Roald Dahl but modern, and more PC, but most importantly they are funny. David Walliams is also doing Britain’s Favourite Children’s Books on Channel 4 on St. Stephen’s Day at 6.30pm. Billionaire Boy is on New Year’s Day at 7pm on BBC1. There’s a lovely review here.
Fungus the Bogeyman

No, not Shrek, Fungus

Fungus the Bogeyman starring Timothy Spall and Victoria Wood.  All my kids’ recommendations are based on books this year, and Fungus the Bogeyman is no exception. It follows the adventures of the disgusting, snotty creature in the title, and his son as they emerge from life underground. Expect toilet humour. It’s a 4 part adaptation. 6pm Sky Arts Sunday 27th, or Sky1 on demand any time.

Willy Wonka & The Chocolate Factory – it’s a must, the one thing that must be watched every Christmas or it isn’t Christmas. Just be sure to stick to the original 1971 version with Gene Wilder and not the scary more modern one with Johnny Depp. Christmas Eve 3.30pm on TV3, 2.30pm Christmas Day on 3e; 11am on Sunday 27th also 3e

This sounds just great, just when you thought Dickens had been done to death a period this latest BBC offering shakes, or rather mashes it all up. In the new soap-like drama which will run as half hour episodes starting on St Stephen’s night famous characters from Dickens’ novels live and interact in the same community. Starring heavyweights like Caroline Quentin as Oliver Twist’s Mrs Bumble, Stephen Rea as Bleak House’s Inspector Bucket, and Pauline Collins as Mrs Gamp from Martin Chuzzlewitz it’s hard to see it going wrong. The promos are making it look like Eastenders, and that’s probably not a coincidence as it’s written by an ex-Eastenders scriptwriter. Episode 1 of 20 screens on BBC1 on St. Stephen’s Night so it’s one to keep your enjoyment well into 2016. 7pm BBC1 St Stephen’s Day.

The whole premise of the Sherlock series starring Benedict Cumberbatch and Martin Freeman is that it’s set in the modern day so this is a real flip with an episode “The Abominable Bride” being set in 1895. It’s always a good show that holds interest and twists so I’m setting the recorder. New Year’s Day, BBC1, 9pm

The Big Christmas Special this year is Downton Abbey, the final ever episode, titled “The Finale”,  promising “an emotional finish”. Talks of a wedding and a shock in the two-hour long episode. Imagine that. I’ve to decide whether to record (likely) or bingewatch the last two series between now and Friday… Christmas Day, 8.45pm ITV or St. Stephen’s Day, 9pm TV3

A Netflix Original Christmas variety show with a difference. Firstly it’s directed by Sofia Coppola and stars Bill Murray with help from George Clooney, Miley Cyrus and Chris Rock. I watched and enjoyed, it’s a different take but still delivers some traditional song and dance routines that are an essential part of Christmas viewing. Streaming Now on Netflix

Other Bits and Pieces

Well Holy God it’s Glenroe – 9pm on 27th on RTE One- the cast reminisce about the much loved Irish soap, I’ll watch this for the nostalgia factor.

A break from the Christmas TV indulgence, John Bishop’s everyman style and sharp wit will lend a different turn to this documentary about gorillas in Rwanda than your standard David Attenborough documentary, he joins the gorilla doctors, the vets who have dedicated their lives to saving the, sadly, precious few mountain gorillas left in the wild between the borders of Rwanda, Congo and Uganda. (and if you do hanker after David Attenborough he has a show on the Great barrier reef on 30th December at 9pm on BBC1) BBC1, 28 December, 9pm

Cameraman to the Queen

As the title suggests this is a new one-off documentary which follows royal cameraman Peter Wilkinson who has held the job for the last 18 years. The idea is to give a different insight into the life of the Queen as Peter films various state engagements. It’s not just the royal snooping that makes this one to watch, Peter Wilkinson has had a very interesting career before the current job he worked all over the world for ITN including filming Bloody Sunday and being kidnapped and held hostage with colleagues in Africa for 9 weeks. UTV 4.40pm Christmas Day (Different ITV regions at different times)

Panti Bliss owned the year and has specials on both RTE and TV3- The Queen of Ireland’s Christmas Message on Christmas Day on TV3 at 3pm and Panti Does 2015 on RTE St Stephen’s Day at 10.55pm.

Top Gear from A-Z narrated by John Bishop- will be interesting to see how they deal with that “fracas” that led to Clarkson leaving the show. BBC2 St Stephen’s Day 8pm

That’s a very, very small selection, there are LOADS of movies too (Captain Phillips starring Tom Hanks is my favourite new one I think, Gravity is great too) and the classic Christmas watches like A Christmas Carol, Muppet Christmas Carol and It’s  a Wonderful Life are all on the schedules, and for the small ones the Gruffalo and Gruffalo’s Child are there, and some very entertaining Christmas episodes of Ben and Holly that have had us all rolling on the floor laughing, sure isn’t that what Christmas is all about?