We recently received a copy of “Oisín’s Brave Adventure” to review, a book that’s made in Ireland and aimed at 3-7 year olds. We’d have reviewed sooner but after one read it went missing and was found following recent excavations under the boys’ bunk bed and enjoyed like long lost treasure.

The book is based in Ireland and features two explorers –  Oisín the Brave and Orane the Dragon of N’Scaul. Our heroes find themselves on an adventure that takes them on a journey to find the mystery behind a flashing light coming from the surface of the moon. Their travel portal is a dolmen, nice touch.

On the moon they meet three aliens called “Aon, Dó, Trí” although their names aren’t introduced in the text. (On the text, it’s in the Comic Sans font, which while easy for kids to read I have an inherent dislike for, I think because some people use it inappropriately.)

The story is a little jumpy, and while my four-year-old liked that the source of the light was our heroes friend that had crashed, the six-year-old wasn’t impressed. It’s hard to impress this six-year-old all the same, but the back of the book did. He has a slight obsession with learning the Irish for different words and there’s a comprehensive fóclóir at the back of the book which he just loved. 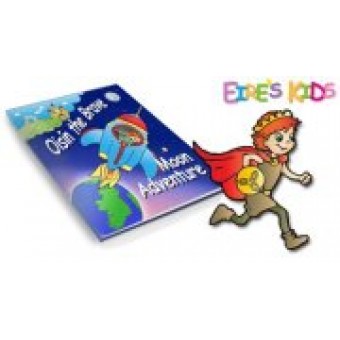 The book costs €6.99 and it available from bookshops nationwide or in Eire’s Kids website. You can read more about it on the Eire’s Kids Facebook page  or on their website .

Michelle and Derek who wrote the book have two young children themselves. They set up Eire‘s Kids Publications over two years ago and they co-write and illustrate the books and have recently published the second in the series, Oisín the Brave and Robot Island.