Home Parenting Looking Back on the Day I Became a Mother: Moods of Motherhood Blogging Carnival

Looking Back on the Day I Became a Mother: Moods of Motherhood Blogging Carnival

I’ve had an assignment for a few weeks now to write about my “moods of motherhood”, and like most assignments I only half-read it first so I thought that I’d have to choose one mood (not so). I made myself choose “joy” because I feel that when I think about emotions I feel as a mother guilt is prevalent. So, I am consciously choosing to remember to celebrate the joy of motherhood, to step away from the guilt I feel as I working mother, as mother who doesn’t do exactly what she thought she would for her children all of the time, who makes mistakes and worries over them and relish the good more.

Sure, I had happiness in my life before I had children, but from the time my husband and I first held our eldest son we realised that there had been a seismic shift in how we experience all emotions as parents, and how now we could feel so many in such rapid succession. Tiny developmental steps in a baby’s life are huge occasions for a new parent, Seeing your toddler whoop with excitement lifts any parent’s heart. Little things that mean so much.

I’ve been thinking about the day that I became a mother. In those first moments in the wee hours of a Wednesday morning when we met our son we felt wonder and awe, that we had created such a perfect little person with one small act months earlier. (The same as we felt with his brother and sister when they came along obviously). We were joyful that he had made his arrival into the world safely. We marvelled at how he could possibly have crammed all 10lbs 6.5oz of himself in my abdomen, and how he arrived into the world, fully formed and ready to grow, and with a full head of hair to boot.

We felt a bond with him instantly and our bond grew as we realised that we were no longer man and woman, husband and wife, we were now mother and father. This very new small person had deepened our connection instantly. I looked at my husband, and then at my son, and knew it had all changed. 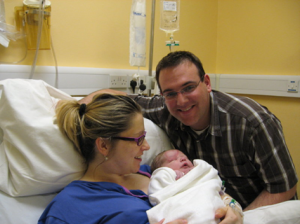 The photo taken by our midwife not long after Ciarán was born. I can’t take my eyes off him to look at the camera.

We basked in the joy, the sheer elation for a couple of hours. Then we became anxious as our son’s breathing quickened and he was whisked away to special care. We worried, a different kind of worry, a parental worry. I felt more tired than I had ever felt in my life having been awake for three days. I fainted for the first time in my life. So many emotions all at once, Our son was less than three hours old. It has continued pretty much apace since that day in September 2008, ups and downs, highs and lows.

We had been noticing as we folded tiny vests (that never fitted our monster baby) in the weeks before baby arrived that life was going to change, and oh how it did. We felt the weight of responsibility on our shoulders from the moment we held him.

Driving home from the hospital a few days later with a clean bill of health, we couldn’t quite believe that we were expected to know how to raise a child. There’s no manual. We were scared.

We knew that he was ours, to love, to cherish, to teach, to grow. We were his home base, his reference point. Everything that we did from the moment on mattered more, because now and forevermore we had someone else to consider too. That pushed us on and eventually we grew in confidence as parents and it all (mostly) came together.

I’ve been a mother for six years. It’s had its ups and downs that’s for sure. Today, I’m promising myself to celebrate the good, to revel in happiness and to try not to dwell on the negative emotions. Wish me luck!
Today’s post is part of the Moods of Motherhood blogging carnival celebrating the launch of the second edition of Moods of Motherhood: the inner journey of mothering by Amazon bestselling author, Lucy H. Pearce (published by Womancraft Publishing).

Today over 40 mothers around the world reflect on the internal journey of motherhood: raw, honest and uncut. To see a list of the other contributors and to win your own copy visit Dreaming Aloud.net