Home Parenting What the Dinosaurs Did Last Night: Our First Dinovember

What the Dinosaurs Did Last Night: Our First Dinovember

Last November I saw posts on Facebook talking about “Dinovember” so I clicked and googled and having checked out this site I vowed to make Dinovember happen in our house this year. My husband and I agreed that it would be a bit of fun.

Then we completely forgot til late on Halloween night, yes, the dying hours of October. So I waded into the toybox zone, stood on Lego and tripped over a few cars and eventually found some toy dinosaurs. I returned with my battle scars to the kitchen, spilled some porridge on a tray and let the dinosaurs loose in it. We’d start gently.

I’d planted the Dinovember seeds earlier in the week, letting the boys overhear me saying to their daddy that I hoped we’d escape Dinovember again this year and that our dinosaurs seemed to be pretty well behaved . The boys’ ears pricked up and they started asking questions and we explained that sometimes toy dinosaurs come to live and get up to mischief at night during the month of November, so it’s called “Dinovember”.

They dismissed it, but the porridge sort of made them believers. Ciarán, the wise six-year-old didn’t buy it at first  but we thought we had Cathal on board, until he went into the sitting room and made a mess, then shouted at us to come see what the dinosaurs had done in there. Hmm.

The next night the dinosaurs spilled baby powder all over the changing table. I gave out in the morning and suggested that the dinosaurs would have to go. I hammed up my annoyance. They giggled and consoled me, decrying the bad behaviour. 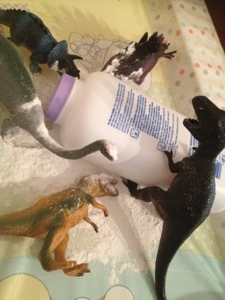 Dinosaurs in the baby powder

Since then we’ve had dinosaurs helping themselves to breakfast (although it was pointed out that TRex was a carnivore so wouldn’t eat cereal). We’re not hardcore like the Dinovember creators who make dreadful messes, but we mess enough that the kids know it’s naughty and might have us a little cross.

Dinosaurs having fun with tinfoil

And spilling the fruit bowl, even sampling some apples 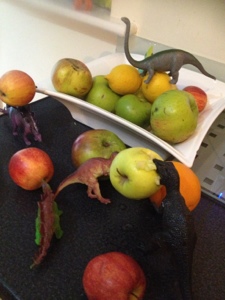 Checking out the fruit offerings

Dumping the entire contents of my handbag on the floor (I got very, very mock annoyed)

The contents of my handbag ravaged by dinos 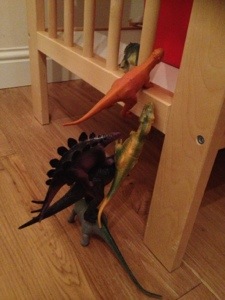 Piggybacking each other to climb up the changing table 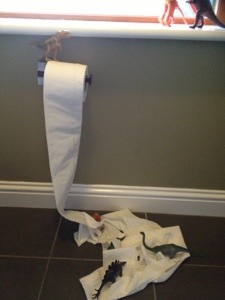 So what’s it all about?

Magic and imagination. While I don’t think that my children need to live magical lives I love to see their faces light up when they discover the mischief that the dinosaurs got up to the night before. So, for the month of November their toy plastic dinosaurs will do something unexpected while we are sleeping.

Initially we wondered how we’d manage to come up with ideas, but my husband and I spend a few minutes every night conspiratorially coming up with plans. We’re like kids ourselves, it’s like being Santa every night for the month. Some days the dinosaurs just play with toys, but it’s the boldness that the boys really love.

The adults get to use our imaginations too, spending a few minutes each night getting creative with the plastic toys. The kids bounce in in the mornings wondering aloud what the dinosaurs have been up to overnight, some days I’ve been gone to work already and they’ve insisted that their Daddy takes a photo to show me.

Then there’s the mock crossness every morning as I complain about the mess that the dinosaurs have made and their badly disguised glee as their parents moan about the mess.

The minute I get to the childminder’s in the evening the first thing they say is “Mam, you’ll never guess what the dinosaurs did last night”. They fight over who tells me, their eyes dance with excitement.

Maybe it’s overkill, maybe we’re spoiling them, but watching their imaginations go into overdrive is worth it.

It’s not too late for the Dinovember mischief to start in your house. There’s ages til we have to start the Advent calendars.