Home Food Cooking with Kids: It's not all about the cupcakes

Cooking with Kids: It's not all about the cupcakes

“Dad of five and Ireland and Munster Rugby legend, Ronan O’Gara is leading out the Ben’s Beginners programme, which seeks to encourage Irish mums and dads to get cooking with their children, and nurture a lifelong love for wholesome food. Ben’s Beginners believes that when parents and children move from setting the table to cooking together, it leads to a better relationship with food, with healthy meal preparation and with each other.”

So read the press release in my inbox, since I’m a fan of cooking with kids I kept reading:

“The key points that the survey shared were that in the research with kids under seven:
-30% could not identify a red pepper and 85% cannot correctly name a leek
– Nine out of ten children can identify broccoli but only 58% can correctly identify courgettes
– Only a third of children surveyed knew what chips are made from
– One in three could identify what animal ham was made from” 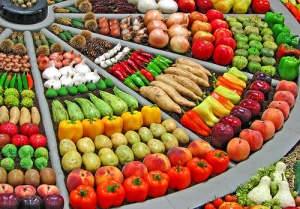 Like any competitive mother I decided to test my kids on the way home from school. I was confident with my eldest who’s just turned six, and as expected he scored 100%. I was less sure of my four-year-old but he came good, and surprised me with getting them all right too, although he did tell me that courgettes are made from cucumbers. He has the right idea at least, he knows what they are, but purely to confirm how much he hates them.

I’m quite certain that I had never seen a courgette when I was four, and I’d say I was closer to ten when I first tasted a red pepper, but times have changed and these are common vegetables nowadays, and ones that can usually be found in our fridge. We never had leeks in the house as kids either, but again my kids know them well (and one passionately detests them). So while these statistics are interesting, and certainly grab attention, (the Food Dudes programme in schools is probably to thank for some of the recognition) I can’t help but think that whether a preschooler can identify a leek isn’t really an indicator of how well nourished that four year old is.

So while I’m not jumping to any conclusions about the survey, and I’d be interested in the responses that the parents of those children would have given to the same questions, I do like the idea behind the press release. It’s the “Ben’s Beginners” programme which aims to “get parents and kids cooking together at dinnertime”. Since it’s sponsored by Uncle Ben’s it wants us to use rice to cook with our kids (they can sweep the floor afterwards, self-feeding toddlers and rice are not a good combination), and there are prizes galore for the winners. (You can check it all out here).

The press release continues to say that the research shows that four out of five parents surveyed believe that being able to cook sets their child up for life, but that in practice only 14% of children prepare evening meals. I’m not surprised. The survey tells us that time pressure is the main reason for this, followed by a preference to get the job done themselves and 20% think that the children don’t have any interest in cooking, yet when asked if they’d like to cook more with their parents a whopping 79% of kids said that they would.

I like this idea of getting kids into the kitchen and involving them with their food, but with the proviso that it’s not for every day. It’s just not possible in most houses with young children where dinnertime is a busy time of day with tired kids, tired parents and everyone is hungry. However, I do think it’s important to get kids cooking, it’s educational, it keeps them busy and out of mischief and they love spending time doing it. Win win.

Don’t fall into the cupcake trap though, stay away from the gingerbread men. I’ve been there, it’s not worth it. It’s messy, it’s hard work. and you still have to feed them when you’re done. You’ll find sprinkles in every crevice for weeks afterwards and get used to that lovely shade of blue food colouring that’s staining your kitchen table. 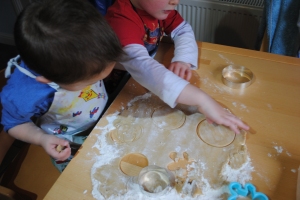 I do not recommend this course of action Photo: Sinead Fox

My boys have been “helping” me cook since they were about two. They can both (messily) make a sandwich, they are handy with a grater and can “roughly chop” with dinner knives with the best of them. Sometimes when they want to help and I’m in a hurry I get frustrated but then I set them up with chopping boards and surplus ends of vegetables at the kitchen table, well away from my own work area and I let them get busy. They think that they’re helping and they’re happy and I can get one with things.

I have yet to see any truth in the tip often suggested that if you involve kids in the cooking of food that they will eat it. There is nothing that could make a mushroom pass the lips of my six-year-old, even if he had hand reared it himself, and my smaller boy will spend hours chopping vegetables and tending to a meal, confirming regularly that he’s definitely not going to eat it but he likes to help making it.

But there are so many benefits to getting the kids cooking, not baking, cooking. Hold off on the sprinkles, they can’t live on them when they’re in college. Make them dinners, let them watch, have them grate, or stir, let them them peel, keep them involved, it’ll pay off. Now all I need to do is to train them to clean the kitchen after themselves, or better still, after me.

Disclosure: I have no affiliation at all with Uncle Ben’s and received no payment of any type for this post. Sometimes I just blog about things that are mentioned in press releases I’m sent.