I wrote last week about how six feels so old, much more than five.

This week realise that I feel exactly same about four. Those damned even numbers get me every time.

When Cathal turned three it felt like a normal progression, just a number. But four seems like he’s ready to flee the coop and head off to big school. Luckily, I’ve a year to prepare for that big day, but in the last week I think that he’s just grown up so much.

I probably baby him a bit more than I did Ciarán at that age, and he infantises himself a bit by insisting on calling me “Mama”. Ciarán calls me “Mam” but Cathal prefers Mama, the baby form, also used by his little sister.

Then there’s those eyes, those big, no those HUGE brown eyes that tell exactly what he’s feeling, that I get lost in and  that attract comment from complete strangers. I wondered a few months ago if he was picking up on all the comments so I asked him “what part of you is the most beautiful Cathal?” and he replied “All my bits”. How wise, for a not even four year old. After a little hug for giving the best answer ever I pressed him, “What part of you do people say is beautiful?”, “My eyes” he sighed, and looked away, as if to hide them. 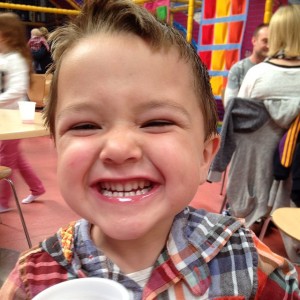 All his bits are beautiful, and it delights me that he has the confidence to say it like it is. Just like I love his continued love of the colour pink, knowing that he’s breaking norms, asking for the pink cup and daring anyone to challenge him about liking it. He has a finely honed sense of justice, which is only enhanced by his middle child status in the family. He’ll fight for what’s right, or more often for what he considers fair.

In this past year Cathal has left his tantrums behind, his vocabulary has increased exponentially and while he still has some speech quirks, like his bizarre switching of “Sp” for “F” which is less strange for “foon” than it is for “Fiderman” he’s started making his own jokes, his sense of humour has grown up and his memory has started connecting things. He’s growing up. He still likes me to hold his hand or stay close when we go to new places, he still needs to run if he needs to do a wee when we’re out, but he dashes into playschool without a backward glance, knowing where he belongs, he remembers things now and has advice and opinions on almost everything.

Despite having what most would judge a pretty good life, Cathal isn’t so sure, he has for almost a year told anyone who’ll listen that “it isn’t easy being twee”, and of his keenness to be four, which in his three-year-old voice is “a vewy big age”.

He woke this morning and rushed in to our bedroom seeking presents. He was shooed away pre 6am but eventually we relented. He enthusiastically ripped open wrapping paper declaring each small gift “exactly what I wanted”. The excitement was palpable, then he stopped, looked at us and asked if he’d gotten bigger during the night. We theatrically eyed him up and down and agreed that definitely he had. He was delighted, reminding us that four is a “weally” big age. And he’s right, it’s the biggest he’s been so far.

But even when you’re a really big age, sometimes you still need your Mama’s knee and a quick snuggle, or your Daddy’s shoulders to ride high on, and that’s absolutely fine, because this Mama needs that too.