When I first heard people talking about “messy play” I had a little chuckle. Not at the idea of messy play, but at the idea of play that was anything other than messy! But messy in this context means more than just untidy it seems, it’s slippery and slimy and wet and sticky. The experts say that messy play helps develop sensory and motor skills in children. That sounds important. And Mama Courage challenged us bloggers to try it out, and I love a challenge.

I’m not totally averse to messy play, I mean I often let the boys paint at home and our dining room table is known by the boys as “the make and do table” where they scavenge the recycling bin and store empty toilet roll holders and old cereal boxes, just like I did in the 1980’s.

We’ve gone through lots of bottles of PVA glue, including one that was discovered spilled on the floor under the table the next day, and resulted in threats to never, ever allow any more glue to cross the threshold. Glitter has had sparked (or should that be sparkled) similar incidents and declarations. 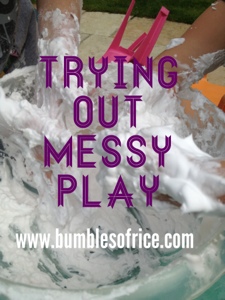 We’d never really done what the experts call “messy play”, the one that involves slime and gunge and stickyness, or on purpose stickyness.

I’d seen recipes for “cloud dough” online and had decided that that’s what our messy play would be, but I forgot to buy baby oil so we needed a new plan. Google and pinterest helped and decided that we’d make snow! Yes, snow, in July.

We followed the instructions the blog I found the idea on and mixed our (euro shop acquired) shaving foam with bread soda to make the snow in a basin outside. The boys used their hands. They couldn’t believe that I was letting them put their hands into the mess. 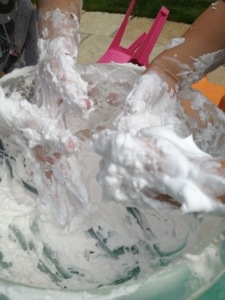 Then, we added vinegar (white wine vinegar because that’s what was in the press) for a science edge to make it fizz (Dr How would be impressed). The boys watched in wonder for five minutes and then asked to wash their hands and complained that the vinegar was stinky and the snow was too messy!

I turned the garden hose on them to clean them, and they enjoyed that a lot more than the actual play.

They loved doing the messy play project for about five minutes, and were in shock that I let them do something so overtly messy, but for us it didn’t give the hours of enjoyment others talk about.

The ice block rescue mission was a much more successful activity in our house.

Is it bad that I’m relieved/feel justified in not spending my days supervising messy play? Possibly, but I consider this to have been a very, very successful experiment. Feel free to use this post to justify not trying it with your kids. You’re welcome.

The post is party of Mama Courage’s Messy Play Projects linky. Check out the rest of the posts here.