We were in a bike shop recently, getting a puncture repaired on the buggy. My three and a half year old son, a proud bike owner since Christmas was eyeing up the kids’ bikes display.

On one end there were blue and green and red bikes, with spiders and monsters on them. On the other, shiny pink bikes with glittering streamers and baskets, some even had seats for dolls and teddies.

He took it all in, eyes running up and down the row of bikes. Then, he turned to me and said “It’s not fair Mama, why do only girls get sparkly things?”

He loves the sparkles, sure who doesn’t? I reassured him that sparkles are not just for girls, and he moved on to complaining that only the girl bikes had baskets and that boys needed to carry things too. All was well in the world until moments later when the man in the shop tried to dissuade him from saying he liked the pink bike and good humouredly teased him for preferring it.

There’s a lot of fuss being made about girls and pink, or branding toys “girls’ or boys'”. But it all tends to focus on the girls being left out or pigeonholed not the boys.

I’ve two sons who are old enough to tell me what’s on their minds (and a small daughter who isn’t quite there yet but is learning fast).

The boys “know” that pink is “for girls”, but my 3 year old happily still admits to loving pink. He requests the pink cup, the pink straw, the pink sticker. In cafés staff apologise for giving him pink anything, and he explains that he loves pink.

In the library at make and do time glitter is produced and if it isn’t he is straight to the librarian to question the omission. Pink glitter is his favourite. He’ll always choose the sparkly anything, it’s so much more interesting.

I love that he’s confident enough to do that now. But lately he’s starting to realise that people don’t think that he should like pink and this awareness means he’s starting to hesitate before asking for it. This saddens me, it’s only a colour, why should it be limited to one gender?

He still plays with all the “boy stuff” that he’s supposed to like, he wears only boys’ clothes, he decries anything with princesses as “too girlie” but he likes the colour pink. He also likes baking and watching Peppa Pig, Doc McStuffins and My Little Pony, but the only T-shirts he’ll find with them on are in the girls’ section, with frills and glitter and he won’t go that far.

He’s a little boy who happens to like pink, among other things. Isn’t that allowed? 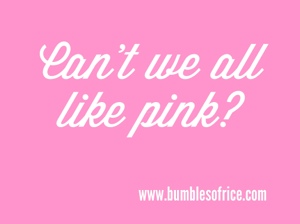